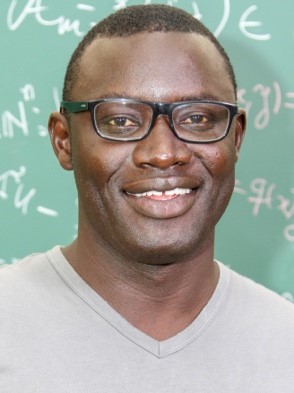 Moustapha was born in Senegal in 1981. He graduated with a Master Degree in Numerical Analysis from the Gaston Berger University of St-Louis in 2004. He was selected for the diploma program in mathematics at the Abdus Salam International Center for Theoretical Physics in Italy in 2005.While there, he passed the entrance exam for the International School for Advanced Studies and began his PhD in geometric analysis. Following his successful defence in 2009, he was an assistant at the Université catholoque de Louvain in Belgium until 2010. He became a Humboldt Postdoctoral Research Fellow at the Goethe-Universität Frankfurt until 2012 before being granted a postdoctoral position at the Università degli Studi di Milano-Bicocca.   He has been holding the endowed Chair in Mathematics and its Applications at the African Institute for Mathematical Sciences (AIMS) in Senegal since 2013. He is currently the Acting Center President of AIMS-Senegal. His research interests include partial differential equations and differential geometry, mathematical modeling, agent-based modeling, predator-preys, etc.