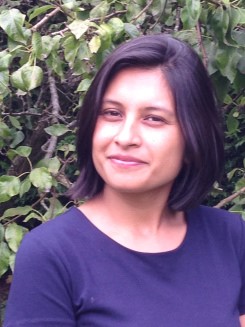 Samaya is an astrophysicist, and the spokesperson and assistant professor for the GRAPPA Centre for Excellence in Gravitation and Astroparticle Physics at the University of Amsterdam. She is also a joint faculty member at the Anton Pannekoek Institute (astronomy) and the Institute for High Energy Physics (IHEF) at UvA and a member of Nikhef. She completed her Master’s Degree in Physics at the University of Cambridge before joining the Paris Observatory for her postgraduate studies. She received her PhD at the Institut d’astrophysique de Paris in 2007. From there, she completed her postdoctoral research at the Canadian Institute for Theoretical Astrophysics, the Jet Propulsion Lab, California Institute of Technologu and Radboud University Nijmegen working on gravitational wave and electromagnetic emission from compact object mergers since 2007. She was a part of the team that discovered GW170817, a binary neutron start merger detected in both gravitational and electromagnetic waves, in 2017.  In 2016 she was awarded the Special Breakthrough Prize in Fundamental Physics as part of the LIGO Scientific and Virgo Collaborations the Gruber Prize in Cosmology. In 2019, it was announced that she will be one of the recipients to receive the 2020 New Horizons Physics Prize from the Breakthrough Prize Foundation. Dr. Nissanke’s current research focuses on the detection, measurement and interpretation of gravitational waves, the astrophysics of compact objects (black holes, neutron starts and white dwarfs) binaries, and general relativity.